Removing and Replacing the Motor on a Pin*bot Visor 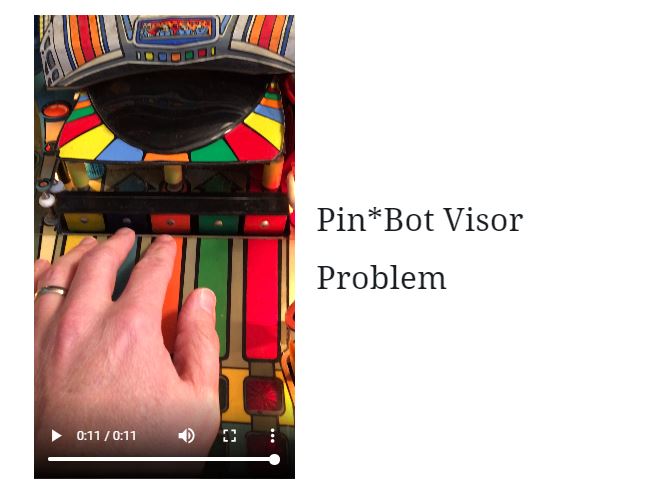 I was having problems with the visor lowering down correctly on Pin*bot pinball machine. It was getting hung up with about an inch from the bottom. I cleaned the visor and motor assembly, visually inspected, and tried a number of adjustments. None of these things, worked and finally decided to try a new motor.

Follow-up: Replacing the motor did NOT fix my problem. It ended up being and adjustment with the two screws on top of the visor (step 5) and with the 3 screws attached to the drop-targets (step 10). My old motor ended up being fine.

Here’s the steps to remove the visor on Pin*bot.

1. Disconnect the two connectors that run to the blue ramp. These are under the playfield.

2. Remove the three screws holding the top plastic to the visor.

4. Remove the blue ramp along with the connectors.

5. Remove the 2 screws holding down the visor.

6. Remove the hair pin clips that opens and closes the visor.

7. Disconnect the connector at the motor.

8. Removed the 2 screws that hold the motor assembly in place. Be careful not to loose the bushing (and make sure it’s there).

9. Remove the connector that runs to the drop-targets.

10. Remove 3 screws that hold the drop-targets.

13. Remove the set screw with a hex key. This would also be a good time to inspect the switches. Make sure the metal arms have not broken off and check for continuity on the switches.

14. Remove the the 2 screws holding the motor in place.

15. Remove and replace the motor. I had to install two pins on the new motor assembly (.093 male pins) and reused the plastic housing from the old motor.

Follow the steps backwards for putting everything back in order.

Any questions? Feel free to post in the comments sections for help!