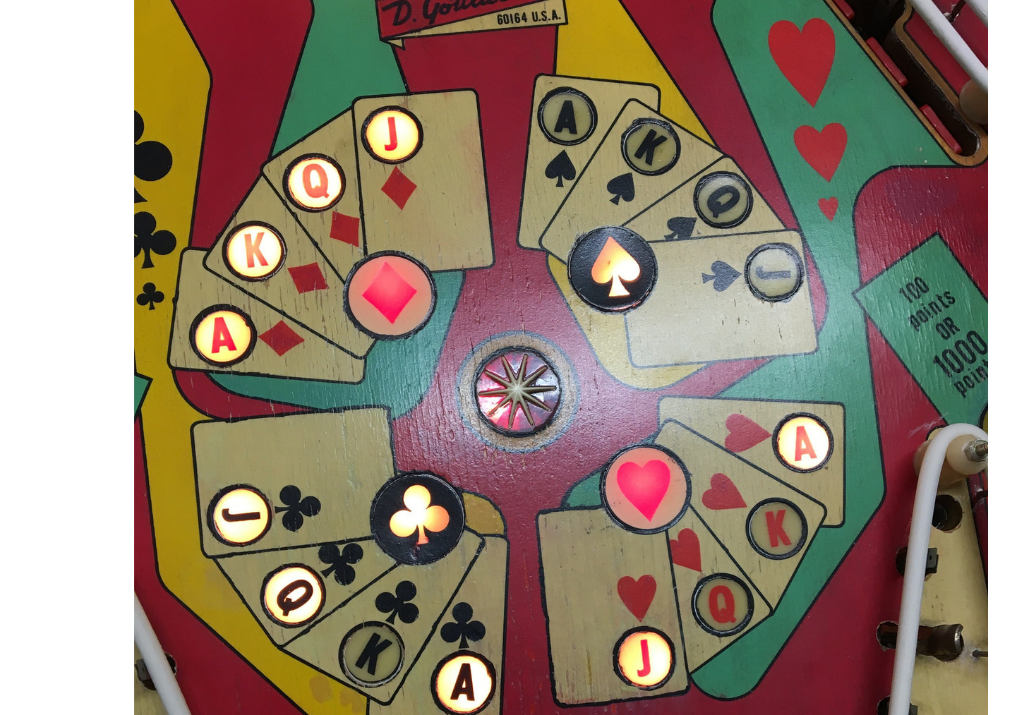 Got another pinball machine in the shop and similar to the Strange World that I did last month. This one came into the shop with various wires cut along with a donor coin door for replacement. The first thing I checked was the ball in play unit along with the score reels. All of them need to be cleaned and adjusted. I decided the biggest challenge of the game would be to the motherboard. I took this out of the game, and started working on it.

For some reason unknown, the previous owner undid the wiring harness and cut about 15 wires. My guess is there were trying to track down a short and eventually gave up on the game and sold it. My plan of attack was to clean/adjust all the relays in union with fixing the wiring harness. I took apart each relay, cleaned all the switches, and then checked for any needed adjustments. Out of the 16 relays, I only found a couple of switches that need adjusted. The next step was going through the score motor.

I cleaned and adjusted all of the score motor switches. I found a few switches that needed adjusted and double-checked that they were changing states when the motor ran. I found one loose wire that was coming off the motor, and re-soldered that back on to the correct switch.

This unit was also sluggish, and I took it apart. I threw most of the parts into my ultrasonic cleaner. This does a great job removing the dirt and grease off the parts. I noticed the one of the coil stops feel apart and mushroomed quite a bit, so I replaced it with a new one. I put all the parts by together and applied a thin layer of lube were needed. Retested the unit, and now moves smoothly.

Nine wires needed to be connected. I just spliced (and soldered) one harness into the other. The coin door lights where in a different location, and needed wiring to the new harness. This took some time to do, because I wanted to double check all connections along with trying to run the wires through the existing harness. I thought it turned out okay. I finally had everything done on the motherboard, and now put my attention to the backbox.

I spent a while taking apart the ball in play unit along with the score reels. When I had them apart, I cleaned all contacts and rivets, applied lube on the rivets, and adjusted contacts.  I reassembled and manually tested everything. All of the units and score reels were advancing smoothly.

After cleaning the units and reels, I cleaned and adjusted all the relays in the backbox. The next test was to finally plug in the game and see what happens.

Plugging in the Game

The moment finally arrived, and plugged in the game for the first time. I moved all the score reels to zero and hit the replay button and tried to watch the reset circuit go. I noticed that the V relay need to be unlatched and restarted another game. The game reset, ball kicked out of the out hole, and ball moved over the trough switch.

As soon as the ball went over the trough switch the machine went “crazy”. The slingshots were machine gunning, the scores were running continuously, and the lights were alternating. I turned off the game and noticed that a lot of playfield switched needed adjusted. This was due to the game getting new rubbers and just put more tension on the switches. Got the game to settle down and next problem that I noticed was the drop targets. Two banks did not reset on the start of the game and many of the drop targets stuck half way down.

I pulled the playfield out of the game and went through all four-drop target banks. I took them all apart, cleaned, and adjusted. To be honest, this was not an enjoyable task and my time was definitely a lot quicker on the fourth set than the first. Someone on FB recommended a slotted screw starter, and boy, I wish I had it for this process. I kept dropping screws off of my magnetic screwdriver. I went ahead and purchased one and love it!

I put the playfield back in the game and the drop targets moved clean. I had to adjust quite a few switches on the drop target bank and still noticed the two banks didn’t reset at the start of the game. The coil engaged, but not long enough. I adjusted the motor switch and then the problem cleared itself.

With the playfield out of the game, I went ahead and went through the six relays.

The current owner removed the flippers, and I started to reassemble them. I could not remove one of the coil sleeves on the coil, and ended up replacing the coil. I noticed one of the EOS contacts was broken off along with a bad coil stop. I went ahead and replaced everything with a flipper rebuild kit. Current owner bought new parts for the pop bumper and reinstalled it, too.

I was hesitant when the owner brought the game to me with all of the cut wires and the coin door that needed a transplanted. Once I got going on the game, it was not as bad as I thought it was going to be. There was a lot of prep work before plugging it in, but I believe that helped with less problems in the end. It is a fun game and enjoy the drop targets. I also like how the bonus carries over from ball-to-ball.

Feel free to comment below on what you think of the game play on High Hand.

Troxel repair is a participant in the Amazon Services LLC Associates Program, an affiliate advertising program designed to provide a means for sites to earn advertising fees by advertising and linking to Amazon.com.