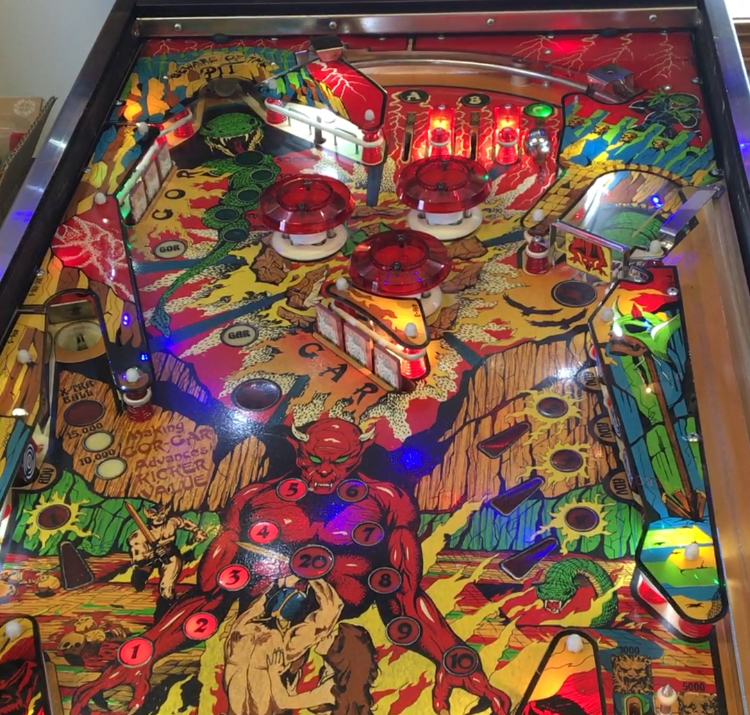 This game came into my shop after the owner reported that it wouldn’t start. The first item that I noticed was the game wouldn’t exit the audit mode. The next item the owner did was replace the batteries. This had no effect on the game. Next, I initially thought it was a 5101 RAM issue, which might have been part of the issue. I continued troubleshooting this section and noticed that the battery holder had some corrosion and wasn’t sending the proper voltage to the chip. I removed the battery holder and installed a NVRAM. Since the boards were out, it made sense to go ahead and make updates to the boards.

In addition, I added new caps to the power supply board as the original ones were still present. The high voltage section was measuring correctly so I didn’t install a HV Kit.

I tested the Power Supply as my next step (before and after the rebuild) by removing all the connectors but 3J1 and 3J2. To test the different voltages on the power supply, use your DMM on the following test points:

After putting the boards back in the game, and it started right up. One thing I noticed was the ball/credit display and player 4 displays would not light up. Siegecraft makes a nice portable portable display, which I used to get the game into free play. I played the game and noticed the right flipper had quite a bit of “give” to it. I noticed that the pawl was damaged and replaced it. As I continued playing a game, I noticed that the drop targets were not scoring points. This was similar to Black Knight and went through and cleaned and adjusted the switches. Finally, all drop target now scored when hit.

The master display had many resistors burnt. Replacing the resistors did not change the displays. I switched player 4 and 3 around and the problem followed with the 4th player display, which rules out that it was bad. I came to the same conclusion to the ball/credit display. Owner said not to worry about the displays for now, and will play it using player 1-3.

The current owner wanted to replace his old and worn out flipper buttons with new LED ones. I bought a kit online and installed it for him. I found the kit was really easy to install and made quite a bit of difference between the old and the new ones. Ultimately, the owner liked the red incandescent flipper button and therefore installed that one.

The game needed what I like to call the “100,000 mile” tune-up. The connectors, sockets, and capacitors needed upgraded after 30 years of use. I was able to play the game a bit, and liked the music and the call outs. In conclusion, this game must of been the cat’s meow when it came out in 1979 as it was the first speaking pinball machine.

2 thoughts on “Williams Gorgar Pinball Repair (You Beat Me)”